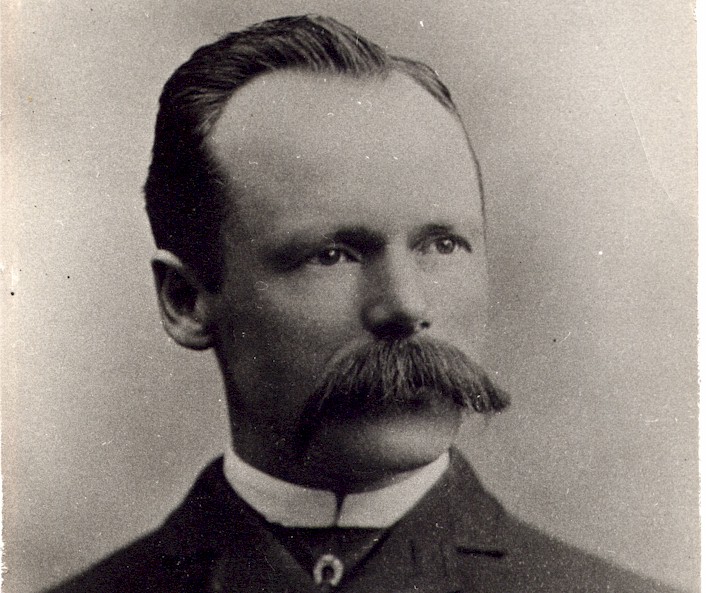 [On June 23, 1891 at the celebration of the 25th anniversary of Aztlan Lodge in Prescott, Morris Goldwater (1852-1939) delivered a lengthy address on the early history of Freemasonry in Arizona. While he spoke of many of the lodges in the Arizona Territory, the following extracts from his speech deal with the Prescott Lodge, the first in the territory. ed]

"The first mention I can find of an effort to start a lodge is in a letter written by our lately deceased brother, Alexander G. Abell, Very Worshipful Grand Secretary of the Grand Lodge of California. It is dated July 29th, 1864, and is in reply to a letter written by Bro. John Howard, now Mayor of our city. In order to insure its delivery, it was addressed to Fort Whipple. The contents indicate the writer’s willingness to do all in his power to help the brethren of Prescott form a lodge. To those who knew Brother Abell, I need not say how much Aztlan Lodge and perhaps every other lodge on the Pacific slope is indebted to him for gratuitous advice and service. For thirty-six years, he served continuously as Secretary of the Grand Lodge of California, and for ability, accuracy, and a knowledge of Masonic Law and Ritual, he was the peer of any member of the craft.”

"The first recorded minutes of a meeting are without date. It was in the year 1864. The Secretary, who was Lieut. Charles Curtis of the U. S. Army, with what was perhaps an excess of zeal, left unwritten many items which would today be of great value to us. The meeting was held at the house of John N. Goodwin, then Governor of the Territory, and is the log building now owned by and the home of Judge H. W. Fleury. (-ed. Note: Governor’s Mansion at the Sharlot Hall Museum)”

"Brother Goodwin presided at the meeting, and after satisfying themselves that all present were Masters, it was resolved to apply to the Grand Lodge of California for a dispensation to open a Lodge at Prescott. The name selected was Aztlan, and Bro. John T. Alsap was chosen as the first Master, Bro. Joseph Ehle was named as Senior Warden, and Bro. H. Brooks as Junior Warden. This petition was signed by nine Master Masons. Of the signers, some we know are dead. Bros. Brooks and Ehle are still with us, and of the others all traces are lost. It being necessary to have a recommendation from the nearest lodge, Bro. Joseph Lennon was selected to carry the petition to Santa Fe and procure from the lodge there the proper endorsement. At the next meeting, which likewise has no date on the records, the sum of three hundred dollars was subscribed with which to furnish a hall. The place chosen was not named, but Bros. Brooks and Ehle inform us it was in an attic over what is now known as Fitz Jason’s Saloon, and then as now owned by Mr. Levi Bashford.”

"On the return of Bro. Lennon from Santa Fe with the necessary recommendation, Bro. John N. Goodwin was chosen to present the petition to the Grand Master of California. Bro. Goodwin presented the petition on April 23rd, 1865, and the dispensation prayed for was granted. Owing to the inability of Bro. Ehle to procure a demit (i.e. resignation) from his lodge, Bro. Brooks was named Senior Warden, and Bro. Herbert Bowers was chosen as Junior.”

"In one of Bro. Abell’s letters written at this time, I note as indicative of the hardships of the day the following sentence, ‘As the war is now over, there will be no difficulty in your members communicating with their several mother lodges and procuring their demits.’”

"The regular meeting night was set for the last Saturday night of each month and has so remained until the present time, and it is pleasing to note that the lodge during its twenty-five years of life has never failed to hold its monthly session. The first to apply to the young Lodge for the Degrees was Bro. Samuel L. Barr, a lieutenant in the Army, and a F. C. of Chapman Lodge, U. D., at Fort Union, New Mexico, who had been ordered to Whipple before he could take his third degree. The first to affiliate were Bros. N. L. Griffin, A. W. Adams, and Zed Pierce.”

"The First Report of the Relief Committee was at the fourth meeting. They reported a Brother of California Lodge No. 1 as being sick and destitute and had expended in his behalf $66. The Committee was instructed to continue its aid.”

"On September 30th, 1865, the first work was done by the new Lodge. The Degree of Entered Apprentice was conferred on Bro. A. O. Noyes and J. G. Mitchell, and Bro. Barr was raised to the degree of Master Mason.”

"On January 2nd, 1866, we find the first record of a lodge funeral. The deceased Brother being Stephen Lee, of Eugene City, Oregon. In the files of the Arizona Miner of 1864, owned by Mr. B. H. Weaver, there is a notice of a Masonic funeral, although there was at that time no lodge.”

"On January 27th, 1866, we find another indication of the results of the war in a resolution requiring all dues and fees to be paid the lodge in gold or silver coin, or in gold dust.”

"In March 1866, a Building Committee was appointed to secure a lot with a view to building a hall, but the matter was indefinitely postponed. And it may as well be stated here that similar committees have been several times appointed and the resulting action has invariably been the same.”

"In August 1866, the last meeting under the dispensation was held. The debts of the Lodge were all paid, the books, papers, and dispensations were forwarded to California by Lt. Barr for examination, and the Grand Lodge was by a vote asked to change the name of the lodge from Aztlan to Arizona. Five months elapsed and in January 1867, the glad tidings came that the charter had arrived.”

"No reason is assigned for the refusal of the Grand Lodge to change the name, but the charter had been granted under the name and number of Aztlan Lodge No. 177. This charter, which now adorns our Lodge Room, was brought from San Francisco to La Paz by Mr. Charles B. Genung and from La Paz to Prescott by Bro. Joseph R. Walker. It arrived here January 21st, 1867, and notices were immediately printed and distributed around Prescott and its vicinity for a meeting to be held January 26th. The Brethren assembled and Past Master John Martin duly constituted the Lodge and installed its officers.”

"In May 1867, a Committee was appointed to raise and re-inter the body of Bro. William P. Jones, who had been killed by Indians near Prescott in June 1864. The Committee selected as a suitable place the present cemetery, and reported to the Lodge that Governor R. C. (Richard) McCormick had generously donated the ground for a Masonic cemetery, and appropriate resolutions of thanks were passed and ordered sent to him.”

"I shall not attempt to give you the details of the work done by the lodge in this early period of its history. The minutes show much labor performed. The Lodge by its standing proves whether this work was square and true. There are records of the deaths of many brethren inhumanly butchered by the ruthless savage, with no friend near to cheer them in the hour of death, or bear a last affectionate remembrance to the loved ones left to mourn their fate. Kind and loving hands brought and laid their remains to rest, and the Lodge was the first to convey the sad tidings to sorrowing relatives. In November 1867, the Lodge asked for a reduction of rent and the price was fixed at $22 a month, gold coin. In May 1868, permission was given the IOOF to hold informal meetings in the hall, and $150. were expended for jewels and regalia.”

"In October 1868, a new Lodge Room was chosen in the second story on the Southwest corner of Montezuma and Gurley streets, over the Diana Saloon, and where the Hotel Burke now stands. $466 were spent in furnishing the hall, and $320 was paid for freight on the furniture and carpets brought from California. In this month, the fence around the cemetery was built. The cost was defrayed by private subscription, and there is no record of the amount, but the lowest bid for painting the fence was $650, while for whitewashing it only $350 were asked.”

"In December 1869, the first public installation took place. It was held in the old Courthouse, Past Master Col. E D. Baker acting as Installing Officer, and Bro. John A. Rush delivering an oration.”