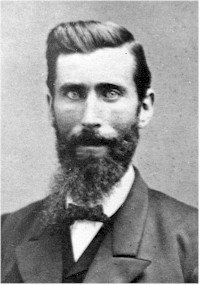 A chance encounter at a Fourth of July outing in 1869 led to the adoption of an orphan Indian child and, many years later, to one of Territorial Arizona‘s most bitter estate settlements. Feelings over the estate settlement were so intense that at one point a rifle was fired into a room occupied by a woman and her two young children.

It began at a spot called Point of Rocks northeast of Prescott when Judge and Mrs. Hezekiah Brooks, along with other Independence Day picnickers, greeted a troop of Fort Whipple Cavalry who were returning from a raid on a small Indian band. Ed Peck, the troop‘s civilian guide, carried with him a small bundle that proved to be an orphaned Indian girl of two years age or less.

Peck later gave at least two versions of how he came to slay the child‘s mother during the raid. The Globe Silver Belt quoted him thus: "I was engaged in the controversy that left the now Miss Brooks a papoose on a bloody battlefield, and it was a bullet from my gun that laid low her old squaw mommy. The squaws were fighting as fiercely as the bucks. The old squaw was doing very effective work. I took good aim, and she dropped. I noticed that a papoose was strapped to her back, and as soon as I could safely approach the body I unlaced the babe."

He gave the Prescott Journal Miner another version of the skirmish: "I saw an Indian, as I supposed, in the brush a short distance from me. It was then getting dusk, but I took good aim and fired, and the Indian dropped. It was Bessie‘s mother, and then Bessie, a little tot got up on a rock so I could see her above the brush, and I went and got her. It was not until then that I knew the Indian I had killed was a woman."

Mrs. Brooks, who was childless, asked Peck to give her the child. Two days later, he delivered her to Mr. and Mrs. Brooks who named her Bessie and committed to raise her as their own daughter.

Bessie‘s adoptive parents were well known and highly respected in the small frontier community of Prescott. Hezekiah Brooks arrived with a mining party in October 1863, and later was the first probate judge for Yavapai County. Mary Catherine Brooks came to Prescott with her first husband, the late Dr. Charles Leib, as a member of the Fort Whipple founding party in December 1863. She was noted for church and charitable works and is one of the pioneer women honored in the Sharlot Hall Museum‘s Territorial Rose Garden.

The circumstances of Bessie‘s capture appeared in Prescott‘s newspaper the Miner July 10, 1869, in an article headed "More Apaches Killed." The Miner updated the story three months later with an account of Bessie‘s uneasy adaptation to her adoptive parents. Not surprisingly the early days were difficult, given Bessie‘s circumstances; a toddler torn from her mother and deposited with strangers who looked, smelled, sounded and acted in totally unfamiliar ways and who called her by an unfamiliar name.

As agreed to by her adoptive parents, Bessie was raised as a normal young lady of the Victorian era, attending school and church in Prescott. The Miner described the adult Bessie thus: "[A] native daughter of Arizona who was brought up in the household of Judge Hezekiah Brooks and is highly spoken of by all who have met her."

In 1891, as Bessie reached womanhood, she lost half of her adoptive parents when Mrs. Brooks died suddenly of pneumonia. More misfortune arrived a few months later when the Brooks‘ brand new home with all its new furnishings burned to the ground.

Bessie next came to the attention of the local press when she was engaged to marry James B. Edgar, "[A] worthy and industrious citizen of this county who resides near the southern suburbs of Prescott." The legality of the marriage of a White and an Indian was questioned because of miscegenation laws then in effect, but Judge Brooks quickly laid that issue to rest.

The Miner later reported it this way: "At the time of her marriage to Mr. Edgar the question was raised that there was an Arizona Statute prohibiting an Indian and a White person marrying. When it seemed that the marriage would be thus averted, Mr. Brooks apparently made affidavit that the bride-to-be, Bessie Brooks, was his legally adopted daughter, and therefore, by adoption, a white girl."

On September 8, 1897, Bessie Brooks, who gave her age as 28, was married to James B. Edgar, age 29, by the Rev. Harper of the Methodist Episcopal Church South. The next year Mr. and Mrs. Edgar became the parents of a baby boy they named William. Later a second son (name unknown) was born to them.

In early 1907 the ailing Judge Brooks left Prescott for Cleveland, Ohio, where he hoped for medical treatment during a visit with relatives in that area. He died there May 30, 1907.

Within two weeks, Bessie learned to her dismay that one of her father‘s nephews intended to claim the Judge‘s estate for himself and other blood relatives. The estate consisted mostly of property in Prescott and an interest in some mining claims.

A shocked Bessie, who had every reason to expect to be the Judge‘s heir, protested and, on advice of a lawyer, moved with her family into her father‘s home. There was a dispute over possession of the house, and a shot was fired into a room occupied by Bessie and her two children. A man named Otis was arrested but charges were not pressed.

Bessie‘s appeal for a share of the Brooks estate soon was denied on the grounds that Judge Brooks had died without will or testament and that there was no record of a legal adoption of Bessie.

She next took her case to Superior court, enlisting the help of Ed Peck to retell the story of how Mr. and Mrs. Brooks had adopted Bessie almost 40 years before. Ed Peck stated that the agreement made was that the Brooks "should adopt the child as their own, give her an education, and make her their heir-in-law."

Peck chose his words carefully because there had been another option available. According to Arizona Territorial law, as a captured Indian child, Bessie could be bound to a family as an indentured servant until reaching age 18. Peck‘s testimony was to no avail. Bessie lost her suit because there were no documents to prove her adoption.

The last act in the legal story appeared in the Miner June 1, 1910, with a report on final disposition of the estate. Most of the estate went to the blood relatives, but Bessie was able to prove ownership of a one-acre plot and the improvements on it.

There is no record what the future held for the would-be heiress. Presumably she and her family moved on to a more sympathetic locale.

An important question remains. The Brooks‘ commitment to Bessie‘s adoption was clear, so why was there no record? There appears to be a simple answer. Arizona Territory did not have a statute for adoption until February 1873; over three years after Bessie came to live with Mr. and Mrs. Brooks. It seems that there is no record of Bessie‘s adoption because her adoptive parents believed that such an "after the fact" action was not necessary.

Something harder to explain is Judge Brooks‘ failure to leave a will. Of all people, a former probate judge should have been aware of the problems he was leaving behind.

In any event, a story that began with a tragic loss that was softened by the best of charitable intentions and years of loving care ended with an unnecessarily sour encounter with the Territorial legal system.

(Al Bates is an independent researcher and a past sheriff of the Prescott Corral of Westerners.)